The Curse is Finally Broken 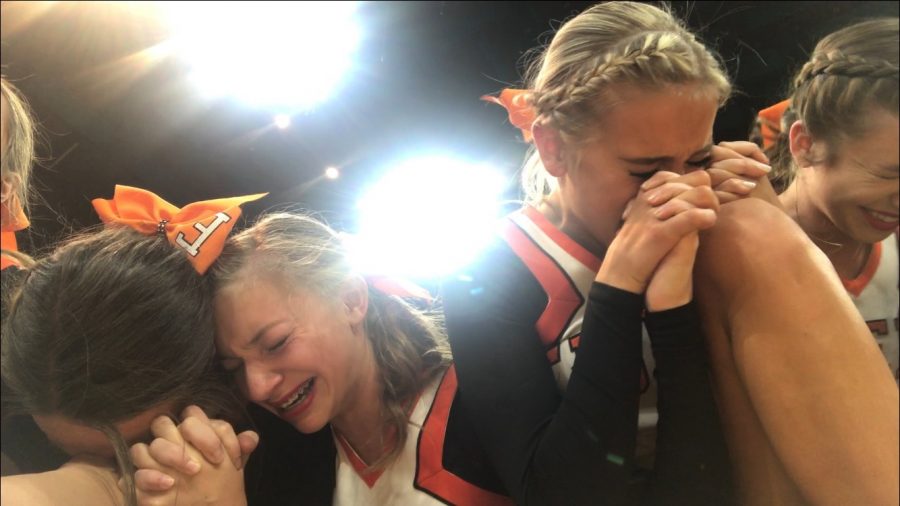 DENVER, Colo.-
Saturday, December 8
It’s 7:00. Cheer performs in eight minutes.
And I’m not at the Coliseum yet.
Minor problem.

A few hours before, the team arrived at the Coliseum. Mr. Carpenter gave them a speech, and they warmed up and stayed loose with the help of a walk of champions at the Coliseum.

After being stuck behind a 3 car accident for 45 minutes that blocked off half of I-25, I’m racing to the Coliseum. I jump out of the car and start sprinting in at 7:06. In the process, I almost run over someone (but didn’t) and race in where Grayson Wolff is waiting with my ticket. I bump past the lady scanning tickets, then turn around to get it scanned before booking it to the stands as the team is taking the floor.

“We were really nervous” says junior cheerleader Lauren Postel. “But after we finished, it went away”

They perform spectacularly, and then the waiting begins.

Before the trophy presentations begin, two parents or fans not wearing any school gear ask to be let out of the row where some people from Erie are sitting, including myself.The short line of Erie families happily obliges. As they are walking out, they say this: “We’re leaving early because we know the results already. We won. Oh, and you guys lost.”

Several of the people they walked past are wearing shirts with prominently displayed Erie logos, so they know who they are talking to.

Talk about making people nervous with a half hour before any announcements are made. If you ever want to do it (please, please don’t) that is how to accomplish it. Because it works.
Case in point: “How do they know the scores?” “I don’t know!” said with excessive amounts of nervousness and frustration is the prominent conversation between the Erie supporters before the announcements began.

Before they announce the state champions, they have to announce the CHSCA All-State teams. It felt like a cheerleader or dancer from every school was called. Which is great. They all deserve the awards they are receiving. And two Erie girls, cheerleader Kyra Bell and dancer Juliana Grimes were named to the All-State team.
The downside is everyone is growing more nervous and impatient by the name.
Once that is done, the 2A and 3A champions have to be announced. Cheer, then Poms, then 2A/3A COED.

And then they announce jazz and hip hop. By the end of those announcements, the wait is borderline unbearable. The nervousness is more noticeable than it has been all night.
The cheerleaders are holding hands with their eyes closed.
Erie fans are taking similar stances, burying their faces in their hands and waiting for the bad news to come.

At this point, we think Thompson Valley has won. They did not have any deductions – that is all we know. We are holding on to a glimmer of hope that because they slightly altered their routine to avoid the four points of deductions that hit them on night one, their score will be low enough for us to win.

“And the runner-up for 4A Cheer… is Thompson Valley High School” says the CHSAA announcer.
“When they said Thompson Valley, my stomach just dropped, and everyone started bawling,” said Postel. “There was not one person that was not crying.., but we didn’t want to overreact too much because they still hasn’t said our name”

In the stands, the conversation is “Did we do it?” “Did we do it?” “Did we do it?” (*while knocking on the wooden seats furiously)
“I think we might’ve done it” (yes, still knocking on the seats, pretty hard at this point).
On cue, the Erie parents and students stand up and pull out their phones, whispering excitedly and very, very, VERY nervously to each other.
The announcer waits for Thompson Valley to take their pictures with the runners-up banner and trophy before moving on to the state champion announcement.
“And your 2018 4A cheer state champions are the (pauses) Erie Tigers!”
“YES!!!!!” I yell with the enthusiasm of a soccer announcer. “LET’S GO!!!!!!
The phones filming the event are all shaking. No one can stand still enough to get a good video. They are being held by people who are jumping around with smiles as wide as the sun on their face.
Every single Erie fan is yelling similar shouts of pure happiness. The cheerleaders are jumping up and down in excitement. “When they said our name, we all just stood up and started screaming and it was the best moment ever” said Postel.
The other cheerleaders are applauding. The atmosphere in the Coliseum feels electric.
Wow, what an amazing feeling.
Winning a state title might be one of the best feelings in the world. New car? Pffft, doesn’t compare. Graduation? HoCo? Prom? Come on.
A little kid in a candy store when they can get anything they want? Now we’re getting closer to this beautiful feeling.
The unbridled joy of winning a state title is unbelievable. You have to experience it to understand. And you can not just hear about it. You need to be there, to soak in the moment, to feel the roller coaster of emotions, to give congratulations, to smile, to laugh, to have fun.
Oh, and this does not go away. At least, it hasn’t yet.
And all the close but not quite enough finishes Erie’s had in the past few years to fall just short of a state title makes this one taste that much sweeter.
Football? Last year, they lost in the state title game. That one stung, and still brings back bad memories. This year, Noah Roper breaks his leg, and despite a valiant effort, the Tigers cannot knock off Pueblo East in the semifinals without their star.
Softball? They had the most recent state title, in 2010, and have fallen just short of a state title every year since while making it to the state tournament every time. This year was a loss in the quarterfinals to eventual state champion Holy Family (who the Tigers beat dramatically earlier in the year).
Other sports have done well, but no team has been as close or has had the postseason success of football and softball except-
Cheer was pretty close last year too. Only a 10 point deduction kept them out of the finals. Add in another two points of deductions, and the Tigers could only watch as Valor took the state title that they were so close to.
It almost seemed as if Erie had been cursed since 2010. The best teams seemed destined to be runners up, but not win it all.
The curse might not have been the curse of the Bambino, but it felt like a curse anyways. 8 years in high school is forever.
So close? A curse? That is long gone now.
This year, none of that happened during the state championships. After deductions kept them out, they learned from their mistakes and were deduction free through the prelims, and only lost one point in the finals the next night.
Their routines were impeccable. Their chants were perfect. Everything fell together at the right time for this team.
And now they are coming home with a STATE TITLE!
Has it sunk in yet?
Revel in it forever, Erie fans. A State Title is coming home again.
Seniors, you will graduate with a State Championship.
Juniors, the pressure is off for next year – for now.
And underclassmen – freshmen, sophomores – the bar has been set.

And appropriately enough, this was written while listening to “We Are the Champions.” On repeat. 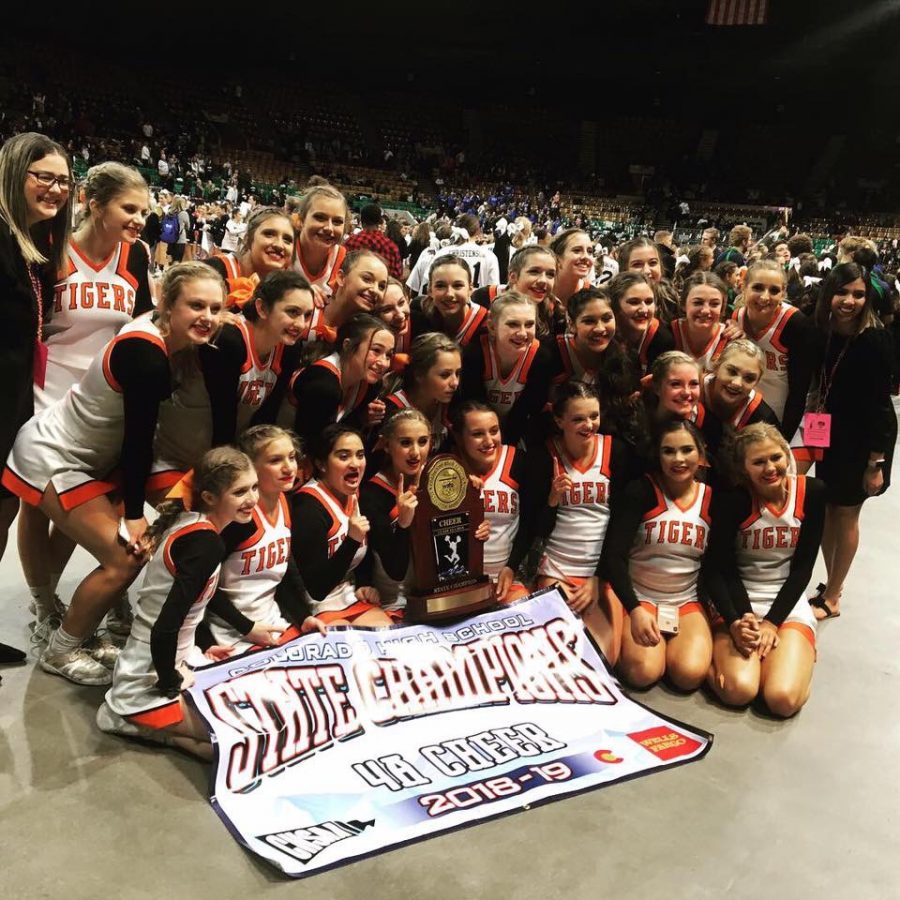 If you want a picture to show with your comment, go get a gravatar.