Through hard work and perseverance, through thick and thin, Erie High School Senior Mason Veve has committed to Colorado State University (CSU) to pursue his academic and athletic career at the Division 1 level. He announced his commitment on December 21, 2020. Veve fully made his decision official by adding his signature to the paper on national signing day, February 3, 2021.

Football has always been a part of Veve’s life, especially at home, as he looked up to his father (papa) who played in high school as well.

“Growing up I have always been around football. My papa probably was the biggest reason I started playing football. He played football in high school and was going to almost play in college,” Veve exclaimed.

Veve’s commitment to CSU is that it has always been his dream school.

“I had an offer from Colorado School of Mines and then was talking to the University of Colorado, Wyoming, and the University of Arizona.” Veve continued, “But, before the 2020 season I told coach Cooper that my dream school would be CSU, and once that came in I kind of knew that there was nowhere else I would want to go.”

All throughout Veve’s football career he looked up to Tim Tebow and had wanted to follow in his footsteps.

“A person that I look up to the most is Tim Tebow. I think it is really cool how he has kept his faith while being able to play football. I have always been motivated by him, and then my papa kind of got his opportunity to play college football taken away so I have always wanted to play college football. To show him I care about him.” commented Veve.

Getting to this point required lots of work and dedication not only on the field but off the field as well. Veve’s efforts in recruiting have led him to get a preferred walk-on offer from CSU. But that came with many challenges.

“The recruiting process has been really hard because there has been no opportunity to visit schools. So even to this day, I have not been able to go up to CSU and meet the coaches and staff because of their recruiting dead period.” Veve continued, “But it is kind of just been something that everyone has had to adjust to. Hopefully, I will be able to get up there soon though, and meet everyone and start getting to work.”

Once CHSAA released the final schedule for the football season, Veve knew that every time he stepped foot onto the field he would have to give it his all.

“Once I realized that we were given such a short season, I was only going to have a few games to make myself stand out. So, that’s what I tried to do.”

All through Veve’s career, he has shown resilience and leadership. This has helped him get to where he is today. Veve is excited to be able to play at his dream school and proud to say that he is a tiger. 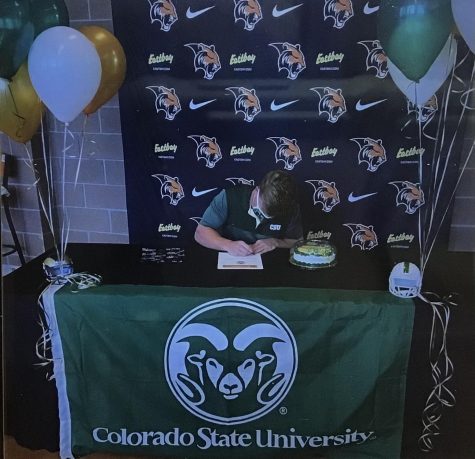