The Aftereffects of Quarantine on Erie Businesses 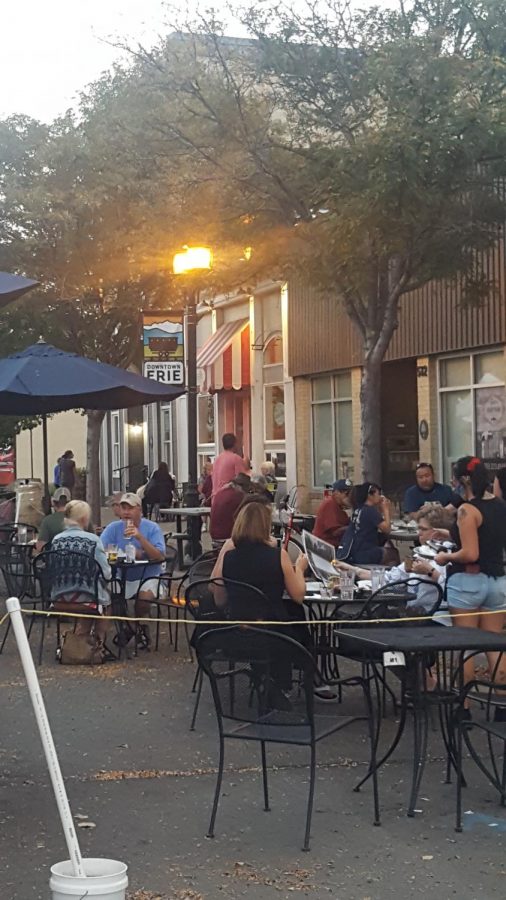 Briggs Street in Downtown Erie. The restaurants and city have worked together to have patios on the street for extra seating

The current pandemic has caused many to worry about the economy as well as the future of the world. Many changes, most negative, have occurred within communities. How have Erie businesses been holding up with these uncertain times?

“[I]t really affected every worker, and affected the owners, [and has] affected our patrons… I think [that] collectively, it really affected everyone on a monumental level.” Liane Daniels, a server for the local restaurant, the Miners Tavern and Taphouse says, “Because, you know, this is how people make their living, and feed their families.”

The Miners Tavern was one of the many restaurants that were forced to close at the beginning of the pandemic, and have only recently been able to open, placing strain on everyone who interacts with their business.  But things aren’t back to normal, and in order to stay open the statewide mandates must be followed.

“The Miners Tavern has done everything possible.” Daniels assures, but these changes have some negative consequences, “[It has] affected us tremendously… people can not hear you as well, they can not see your facial expressions. [And] that is a big thing, especially when you are a server.”

Despite these many setbacks, Erie restaurants have been doing all right, “We have been very fortunate however with our restaurants, being able to expand the patio service to the people in Erie. ” Ellie Cabbage from the Erie Chamber of Commerce (ECC) adds.

It is not enough though for the restaurants to just go back to serving the public after being closed for so long, so they have been working with the ECC to stay in business and to promote themselves to the community.

“So we have tried to promote and market our businesses, we reached out to them initially as many times as we could by phone calls, to see what they needed.” Cabbage says.  To continue helping businesses the ECC is “in the process of doing… a culinary road trip. The chamber is going around and videoing as many of the local restaurants, food establishments, and coffee shops [as possible].”

The restaurants are not the only businesses being affected in Erie. Michael B. Welch CPA firm (local business in Erie) though able to stay open during the quarantine, is having struggles of its own.

According to Tim Jones, a CPA at Michael B. Welch, the IRS had shut down for around two months, causing their mail system to become extremely backed up, affecting the firm negatively, “When we send them letters… It might be two months before we hear back from them, entirely too long for our work.”

This delay has big effects on their customers. “One of our clients has been threatened by the IRS for unpaid taxes…. so we will write the IRS a letter explaining that the client does not [have] unpaid taxes..  [and] the client is very anxious at that point, they are afraid… [But] we will not know for two months, whether the IRS agrees with us or not.” Jones laments.

Overall, the businesses of Erie have been affected negatively by the quarantine and are still recovering. How Erie’s businesses will be in the future is unknown.

“Most of the businesses in the area have been very fortunate and have been supported wholeheartedly by the community. So they are keeping their heads above water for now, but the winter months are ahead of us and we do not know, no one knows what to expect for sure.” Cabbage from the ECC sums up.