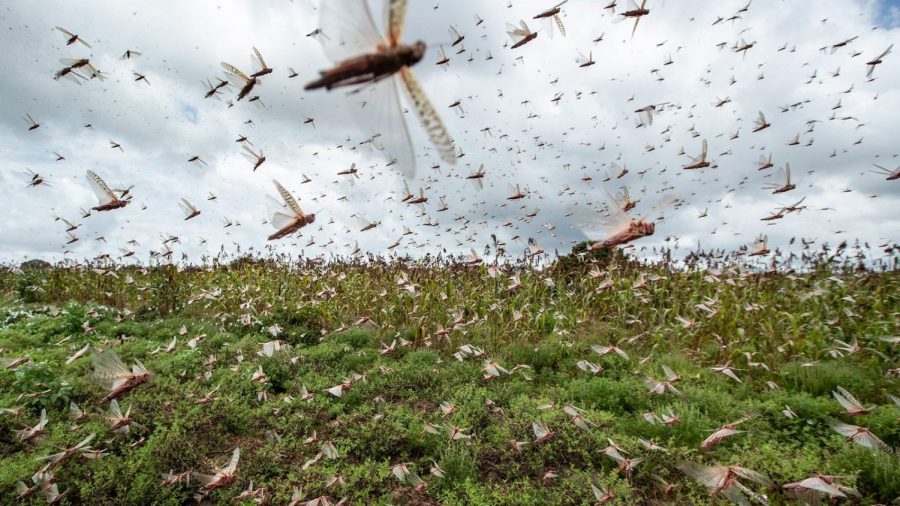 As time passes, the once normal lifestyle that so many had taken for granted turns to an inescapable nightmare for many, especially for those in Africa. Currently the continent is being hit by massive swarms of locusts that will pose a serious threat to the food security in many already established poverty-stricken and vulnerable regions.

Over the past three years, many regions have not been given the chance to recover from the continuous string of natural disasters. Throughout 2018, the continent was hit with several droughts, followed by disastrous floods and heavy rains in 2019. This left them with damaged fields that would become ideal breeding grounds for locusts in late 2019, and early 2020 within East Africa and the Arabian Peninsula.

Locusts bred in December are now maturing and have made their way through freshly planted crops. As farmers desperately try to restart their growing season, locusts continue to swarm and breed.

In their earliest stages, locusts are not harmful and are easier to eliminate, because they tend to confine to denser areas when the eggs are laid and as they mature into a nymph, meaning they can’t fly yet. Even if an area is sprayed once, if more eggs are laid afterwards, they will still develop as normal. This becomes a repetition of operations that has proved to be a problem.

So far the first wave of locusts have been staying in much of Eastern Africa, specifically in countries like Ethiopia, South Sudan, Uganda, Kenya, Democratic Republic Of Congo, Tanzania and potentially Somalia for months.

In an interview with TRTWorld, the resilience team leader for Eastern Africa for the UN’s Food and Agricultural Organization (FAO), Cyril Ferrand, said “[currently] the best defense we have is to have a critical mass of hoppers, hopper bands and then treat them with [the sprayers]  at the moment in Puntland and Somaliland before they fly.”

The idea is that spraying the locusts while they’re still developing through ground pesticides will keep them inside the areas in which they currently reside. This technique applies to countries such as Somalia that are in greater danger, as it becomes even harder to access them, due to the presence of terrorist groups. Ferrand also said “We are trying to address [the issue] through air control operations, applying pesticides, and also biopesticides.” Though if they are not done quickly and effectively, there is a high risk of reinfestation for the entire region.

David Beasley, the Executive Director of the World Food Programme, described this deepening crisis as a “perfect storm.”

Beasley explained that there are currently over 135 million people facing crisis levels of hunger, along with an additional 130 million on the edge of starvation in the wake of COVID-19. He continued, “If we can’t reach these people with the life-saving assistance they need, our analysis shows that 300,000 people could starve to death every single day over a three-month period.” Followed by, “This does not include the increase of starvation due to COVID-19.”

The FAO has appealed for millions of dollars worth of pesticides and intends to give more in aid, but due to border closures resulting from COVID-19, many deliveries are being slowed down or stopped altogether. The United Nations is continuing to push for the usage of biopesticides and remote data collection, as well as working with the government to give waivers that allow travel to those in the locust campaign and be recognized as essential services.

The FAO has set a fundraising goal of $153 million, which was only met with $111 million. The money is needed to support the extremely complex process of defending people, crops, and livestock. The main defense strategy is spraying locusts with pesticides, but the chemicals must make direct contact to be effective. To do this, there needs to be aerial surveillance and trained pilots to see where eggs and swarms are located. Spraying also can’t happen near housing or livestock since it is a health risk. If there is too much heat or wind, the pesticides are also ineffective.

The FAO is funded by United Nations member states, such as the United States, United Kingdom and members of the European Union. It is understandable that there is still a certain level of responsibility to assist developing nations in times of crisis. If the funding goal is not reached and the locusts are not successfully slowed, African countries will require even more money in humanitarian assistance as people go hungry. It is estimated that in the best case scenario only 500,000 people will still struggle. Worst case, over four million more people starve.