What Are We Missing? 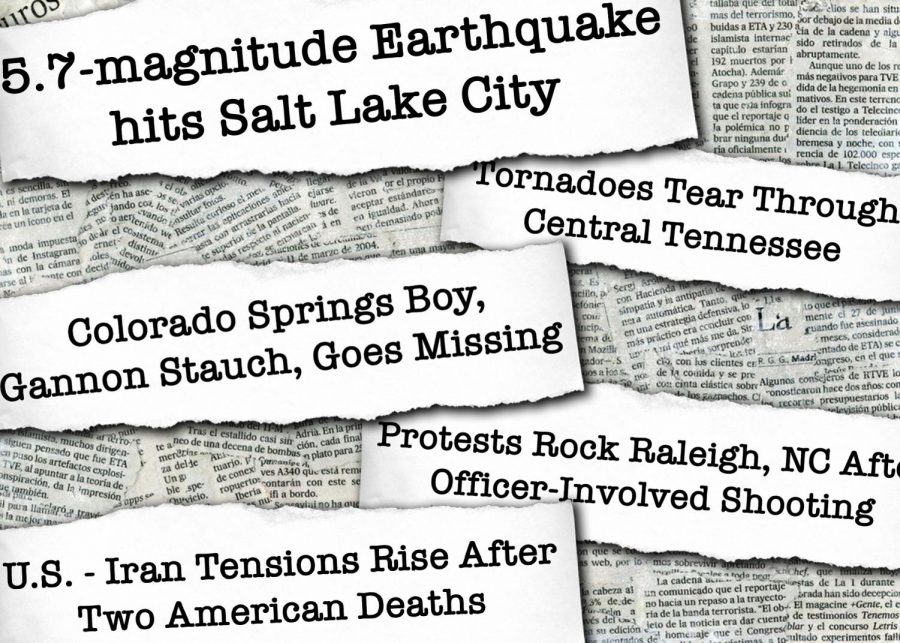 In the wake of COVID-19, much of the media coverage has been devoted to the ever-changing nature of this virus, and the measures being taken to curb it’s effects. Because of this, it is easy to miss out on other news that continues to happen every day. Here is a quick summary of the news we’re missing during COVID-19. Scroll to the bottom for source links and more information.

An earthquake rocked Salt Lake City early in the morning of Wednesday, March 18th. The quake hit just after 7:00 am, just north of the town of Magna. According to Utah Emergency Management, the quake was felt from Logan, UT to Riverton, UT, with the strongest shaking in Salt Lake.

The earthquake marks the strongest to hit Utah since 1992, when St. George was hit by a 5.9-magnitude earthquake.

Utah Governor Gary Herbert is asking everyone to stay away from downtown Salt Lake City while emergency services work. The Salt Lake City Airport is not currently operational, and it has been evacuated.

For more updates and information, check out the sources down below.

On January 27th, 11 year-old Gannon Stauch was reported missing by his stepmother, Letecia Stauch, from his home in El Paso County. Letecia said he left home between 3:15pm and 4:00pm to go to a friend’s house. The initial press release noted it was a “report of a juvenile runaway.” January 30th is when Gannon is officially classified as a missing/endangered person.

Letecia Stauch began to respond to online comments on February 3rd that vilified her interview with KKTV, a local CBS affiliate. Officials say they have put in countless hours searching for Gannon including aerial drone efforts and search and rescue canines. Crews were also spotted searching for evidence in the Stauch family home

The case took a new turn on February 4th when a neighbor came forward with surveillance footage showing Letecia Stauch leaving the house with Gannon and returning hours later alone. In the footage, Letecia and Gannon enter the pickup truck at 10:13am that day, and when the truck returns at 2:19pm, Gannon is nowhere to be seen. On February 5th, Gannon’s biological mother and father made a public plea together begging for anyone with information to come forward.

February 28th holds the next big advancement in the case when court records show that investigators sought an arrest warrant for Letecia Stauch, Gannon’s stepmom. Three days later, on March 2nd, the El Paso County Sheriff’s Office announced the arrest of Letecia Stauch in Myrtle Beach, SC. She is formally charged with Murder in the First Degree (Child Under Twelve – Position of Trust), Child Abuse Resulting in Death, Tampering with a Deceased Body, and Tampering with Physical Evidence. Lieutenant Mitch Mihalko also said, “We do not believe Gannon is still alive,” but his body has not been found.

On March 5th, Letecia Stauch officially arrived at the El Paso County Jail and is awaiting trial. For more details and information, check out the sources down below.

On Tuesday, March 3rd, at least one tornado ripped through central Tennessee hours before dawn, leaving many buildings in ruins and 24 dead. Initial reports from the National Weather Service state that there was EF-3 tornado damage in East Nashville. The reports conflict on what the final rating was, with some saying the tornado reached a rating of EF-4.

Nashville Mayor John Cooper noted that in the Nashville area, 48 buildings collapsed and 150 people were taken to the hospital because of the tornado. According to the Tennessean, the damages at John Ct. Tune Airports in West Nashville reached $93 million, and final assessments were still underway.

Tennessee Governor Bill Lee declared a state of emergency so he assumed direct operational control over any and all parts of emergency management functions in the state. In Putnam County, a tornado touched down between the cities of Cookeville and Baxter, which led to the worst-hit areas. More than 35,000 people in Nashville were left without power for most of Tuesday, and the Nashville Electric Service said power poles were damaged or destroyed and crews were having trouble getting to the impacted areas.

To see photos of the damage throughout the cities, or to see how to help, check out the links in the sources below.

At about 6:40pm on Tuesday, March 10th, dispatchers received reports of a man with a gun at a shopping center on the East Side of Raleigh, NC. When officers arrived the suspect, Javier Torres, took off leading officers in a foot chase where according to a news release, “police repeatedly ordered Mr. Torres to stop and drop the gun.”

As Torres fled the first officer who confronted him, he ran toward another officer who fired a shot into his stomach. First aid was given and Torres was taken by paramedics to WakeMed in Raleigh for treatment, no officers were injured.

Torres faces three charges: altering/removing the serial number of a firearm, going armed to the terror of the public, and resisting, delaying, and obstructing an officer.

Demonstrators told reporters that Torres wasn’t armed, but that he had a pizza box, and the same story made it’s way across social media. Police Chief Cassandra Deck-Brown said the claims were not true. “You will see that the individual does have a pizza box, but he also has a gun — and that’s what the original call that went out said,” she explained.

Protesters flocked to the scene of the shooting, where some were yelling at police. Many left before 10:30pm, when they told a news station that they were headed to Chief Deck-Brown’s house. Dozens of protesters showed up there, and an even larger crowd gathered along Fayetteville Street. A woman with a megaphone led demonstrators in a call-and-response, where they were shouting, “Whose streets? Our streets” and, “Say his name! Javier!” footage from CNN affiliate WTVD showed. Blocks away at around 1:00am, it was reported that protesters took the American flag from the Governor’s mansion and burned it in the street.

Chief Deck-Brown expressed frustration with the media, who she accused of helping spread reckless information leading to the protests. While she does support the public’s right to protest, she asks for it to remain peaceful, noting that harming others and damaging property is not protected under the First Amendment, but a peaceful demonstration is.

On Wednesday, March 11th, two American service members were killed in an exchange of rocket fire between an Iranian militia and U.S. forces. The following day, the U.S. launched a series of airstrikes targeting an Iran-backed militia in Iraq. The U.S. deaths came during a rocket attack on a base in Iraq that also killed one British citizen and injured 14 others.

Tensions in the region had been rising after a drone strike earlier this year that killed Major Gen. Qasem Soleimani. It seemed the tensions were on a route to escalation when it was deflected by the worldwide pandemic of COVID-19, of which Iran has the third largest caseload. Pressure is also loaded onto the Iranian government because of the plunging oil prices. The price of benchmark Brent Light crude oil has dropped 50% so far this year, and top CIA officers say this will more likely cause Iran to lash out than to fold and accept U.S. demands.

A Defense Department official has said the strikes were specifically designed to be punishing and retaliatory, and not meant to escalate into a conflict with Iran. The two Americans killed on Wednesday were with the Army and the Air Force.

For more detailed information on this, click the sources down below.

Other Stories to Check Out:

A New Dinosaur is Discovered: It Could be the Smallest Dinosaur Ever Found

A Pup Named Lt. Dan Could be the Face of Cadbury Eggs this Easter