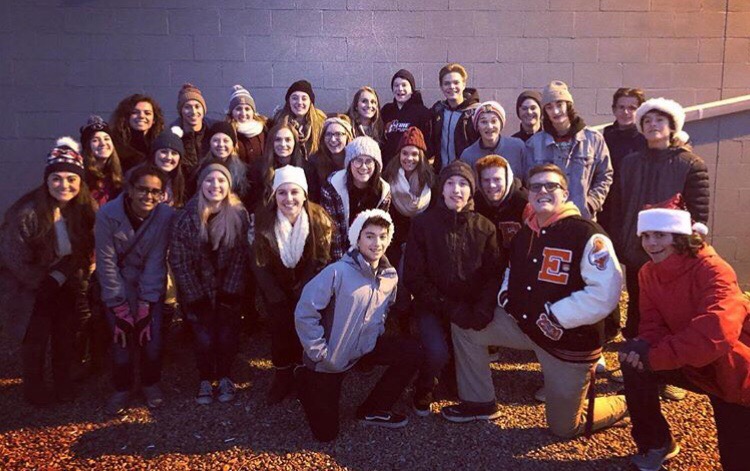 The first performance occurred on Friday, December 7th in Old Town Erie just before the start of the Erie Country Christmas parade. Erie High School’s CR5, along with some of the middle school and elementary choirs, sang into the cold air as hot chocolate was served, marshmallows were roasted, and the people of Erie bustled as they awaited the Christmas parade to begin. CR5 performed three Christmas/holiday songs that were a sneak peek of what the Winter Choir Concert will look like on Monday, December 17th. People then enjoyed the parade which featured the Erie High School band, many local companies, Santa Claus, and much more!

CR5 performs at the Erie Country Christmas parade each year in hopes of inspiring people to attend the Choir’s Winter Concert. This year the concert will be held on Monday, December 17th, and it is always the programs’ most attended concert of the year. There is just something so beautiful about music along with the holiday season. Prior to the concert, there is a silent auction held in order to help raise funds for the choir program that begins at 6:00pm. There are also cookies and cocoa served as the acappella jazz choir (5130) from Erie High sings a few holiday songs to kick off the night. Then at 7:00 the concert begins, and it features songs from the rest of Erie High’s five choirs, as well as two songs sung together by all of the choirs. It is a very fun night that features a lot of great music performed by all of Erie’s own very talented musicians. Chris Tempel from CR5 states that his favorite part of the Winter Concert is that “We sing one song every year, and this allows for Erie Choir alumni to come back and sing with us.” It creates a very family feel, and adds to some of that holiday magic.

A few other things that the Erie Choir Program does in order to get into the holiday spirit is having a performance from 5130 at the Erie Wise Homestead Museum, as well as beginning a new caroling group! So, be sure to come to the Winter Choir Concert on Monday, December 17th at 6:00pm in Erie High’s auditorium, and be sure to keep on the lookout for other holiday performances to get in the holiday spirit!