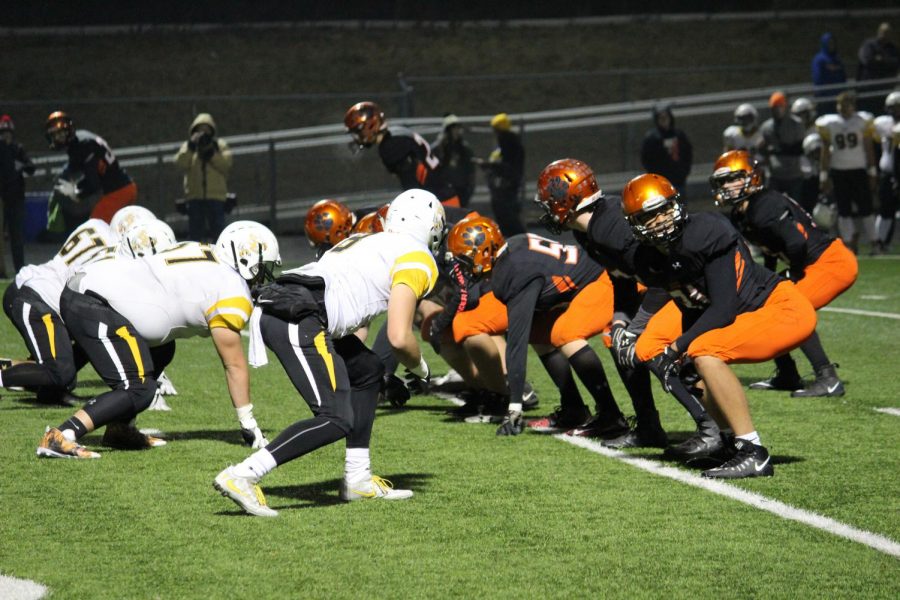 Erie and Pueblo East face off where Tigers look for revenge from a almost mirrored imagine from the season prior.

ERIE- Riverboat Chad and his ace in his pocket, Noah Roper, won the game for the Erie Tigers in a heart racing 22-21 victory over 3 time defending state champion Pueblo East.

The game did not start out well for Erie (9-2), as Pueblo East (5-6) slowly drove the ball down the field, capping their drive with a 2 yard touchdown run from Luc Andrada. Things would get even worse for Erie as Jacob Mansdorfer could not hold on to a pass from Dion Lucero, and Pueblo East picked it off and returned it for 35 yards. What looked like an interception for Alex Mathis turned into a touchdown for East, as Kain Medrano ripped it away for a 16 yard touchdown pass. Erie finally started to get things together on offense as they chugged down the field, during which the 2nd quarter begun. The drive was finished off by an incredible play by Noah Roper, juking out 3 East defenders on a backside screen for a 12 yard touchdown. “Even though they read the screen, I was running down, and the blockers were right there.” said Roper. He really loves his offensive line. Julian Custine made the extra point to make it a 1 possession game.

Luc Andrada had a great 39 yard run, but the Erie defense finally got its first stop after Mathis made a good play on 4th & 6 to keep Medrano from getting the ball. Medrano was actually called for offensive pass interference. However, Erie declined it to take the ball on downs. After running Roper to midfield, the Tigers drive stalled and Custine kicked it into the end zone for a touchback. After an 8 yard run by Andrada, Pueblo East looked like they had a big play. But an Erie defender forced a fumble and Erie would recover with 2:52 left in the second quarter. Jacob Mansdorfer caught a 19 yard pass from Lucero, and Roper had runs of 17 and 8 yards, the latter a touchdown, to tie the game at 14 with 1:40 to go in the 2nd. Pueblo East tried to put together a quick drive, but a penalty, a Jayme Nelms batted pass, and a Nate Hackney sack, the Eagles let the clock run down to halftime.

Erie got the ball to start the 2nd half. After driving down to the East 30, they went four and out. Erie’s defense returned the favor, forcing East’s only punt of the game. The Tigers began putting a drive together, with some runs from Mansdorfer and several big catches from Zach Rees. But then Noah Roper did something that he had not done all season long. He fumbled on the last play of the 3rd quarter.

Pueblo East had the ball at their own 15 to start the 4th quarter. East slowly took 8 minutes off the clock on the back of Sebastian Benavidez. With a 4 yard run, 7 yard run, and a 6 yard run back to back, what Benavidez did was truly impressive against a usually excellent Erie run defense. Andrada squirmed in on a QB sneak from the half yard line to put Pueblo East up, 21-14, with 3:46 to go. The East drive took 8 minutes and 14 seconds, which is an extremely long time in a high school game.

Erie would respond with their best drive of the night at the best possible time. After a touchback, it started with a 5 yard run from Roper. Erie quickly lined up and threw a quick out to Mansdorfer for a crucial clock stopping first down and a 6 yard gain. Roper was then stopped after a gain of 2. The biggest play of Erie’s drive came next. Lucero tossed a perfect 34 yard pass to Nelms. “I look up, and I just heard the crowd cheering, and I was really happy” said Lucero. He had reason to be happy. That play put East on their heels, allowing Roper to break off runs for 11 and 15 yards, putting Erie on the 5. After waiting to call a play, Lucero threw a 5 yard touchdown to Rees, ostensibly to tie the game.

Pueblo East got a 9 yard gain after a Custine touchback. Then came one of the biggest plays of the game. Nate Hackney hammered Luc Andrada, knocking the ball free. “I came off the edge as hard as I could, I hit him as hard as I could” said Hackney, “I told (my coach) put me on the edge, and I’ll get you a sack. I promise you, put me on that edge right now and I’ll get you a sack.” He certainly delivered on that promise.

Ian McDonald (Peak to Peak) ran in under the East offensive tackle to recover the fumble. The Erie crowd, sideline and student section was more than pleased with the reaction of yelling, cheering, tearing shirts, and everything one could imagine. Of course with good reason, because it is the Tigers first football playoff win since 2008.

Roper finished with 213 yards rushing, a touchdown on the ground and through the air, and a 2 point conversion. Lucero was 8-14 passing for 97 yards and 2 touchdowns.

Elsewhere around the playoffs, Longmont rolled over Skyview and Durango smashed Cañón City, 49-21. Erie will travel all the way down to Durango next week for their second playoff game this season. Will the Tigers go to the state semifinals? Tune in next week to find out.

You can watch the archived livestream of the game HERE.