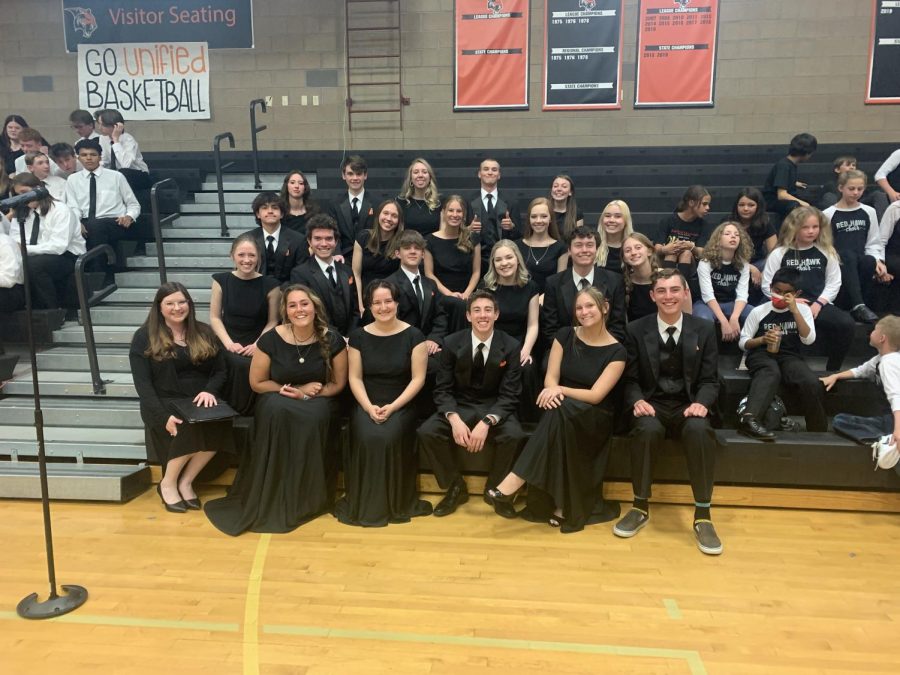 Across the globe, not everyone speaks the same language, but throughout history everyone has used music to communicate with those around them. Erie High School is full of talented singers, and Wednesday April 27th, some of them were able to share their talents in music with singers from Soaring Heights, Erie Middle, and Red Hawk Elementary.

This event, called the Erie Choral Festival, happened after school that Wednesday, and before the performances of Erie High’s CR5 and the other choirs, they gathered to play games and to bond. “It starts at five o’clock with a rehearsal and run through and team building. And then the actual concert starts at seven and then we invite parents, friends, and family to that, and then the whole day is done.” Thalia Burd, Erie High’s choir teacher says.

As both young and old gathered, students shared in a learning experience and having fun. Logan Riesenberger, a sophomore in CR5 says, “This festival could be important to high schoolers for many different reasons. Not only is it important to just be able to sing and take as many opportunities with your choir as possible, but the main reason it was most important for me was because it was a chance for me to sing with my younger sister who I thought I was never going to have a chance to sing with.”

During this performance all of the choirs from the schools had their solo performances, and later sang together. Erie High’s CR5 choir sang songs that were later performed at their concert on May third. “We are doing “Some Nights” by fun. because that’s one of our pieces for May third…Then we have a big combined song as I said with all the chorus. It’s called Sisi Ni Moja, and it means we are one,” Burd says.

Caroline Chudleigh, a junior in CR5 agrees, “I as a middle schooler went to this and wanted to be in CR5 so badly and being able to be in it and be that same example to these kids is amazing.”

Throughout the year Erie High School’s choirs have opportunities to perform for the public, but it is not often that they are able to share that experience with the next generations of Erie kids. As Chudleigh says, “being in middle school and seeing an amazing high school choir was so eye opening, making me want to be in it.”