Margaret Olson Shooting For the Sky 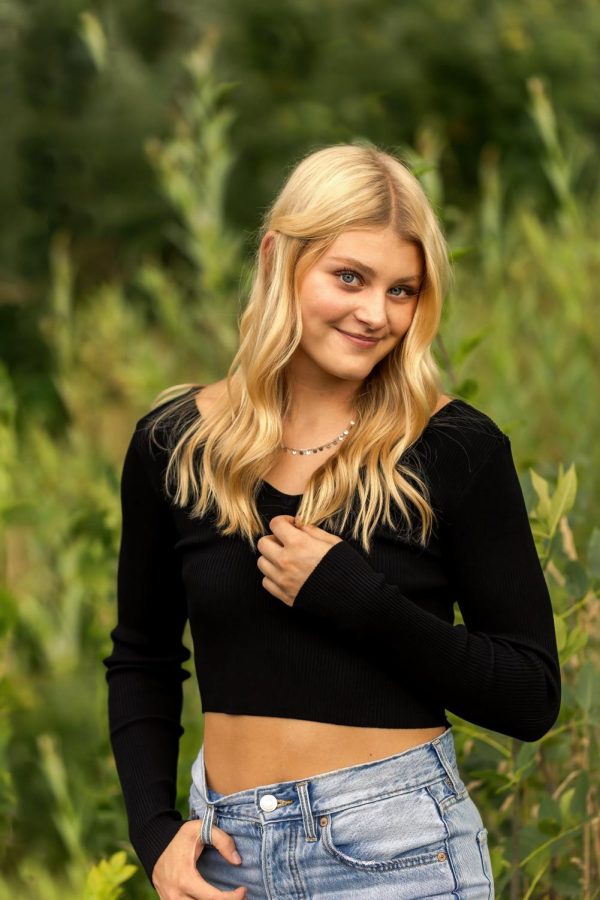 As this school year comes bittersweetly to a close, many seniors are preparing to take some of their final steps in the halls of Erie High School. A place that many have called a home away from home for the past four years. Margaret, or Maggie, Olson is just one of those seniors, though throughout the past couple of years her’s has been a name that has floated around the rambunctious halls of Erie High School more than just a couple of times.

Olson was born in Louisville Colorado in late 2004 and has lived here ever since. According to her, her childhood was full of sports. “I grew up with a dad who loved being a part of that, and he coached me in whatever sport I was in.” She says.

For most people at school she was known for her participation in the volleyball team; she has been playing for Erie ever since she was a freshman. Though, she wasn’t the first Olsen to play for Erie. She says, “My sister started playing about two years before me and was a big reason why I tried out.”

Meredith Olsen, Maggie’s older sister, graduated from Erie in the class of 2020. “I think seeing her play and practicing with her in the backyard helped her [Maggie] develop her love for the sport.” Paul Olson, their father says.

Maggie Olson played on the C team her freshman year, and played two positions that she had never made before, she says, “[I] played middle and setter. I had never played those positions until then but our coach that year made it such a fun experience.”

Her sophomore year was her favorite season, making varsity the team went to state that year. “We made it to state for the first time within twenty-five years of the program,” she says. That season the Lady Tigers finished a 19-9 win-loss record, and during state won three playoff games. Out of the whole state that year they finished in 37th, and in their league, they had placed in ninth.

Along with many other sports during the late 2020 spring season and throughout the year of 2021, sports had changed dramatically. While in most seasons volleyball was a fall sport, during the ‘2020’ season-high school volleyball was pushed to the spring of 21’. This for Olson, and many other athletes presented challenges that made it hard to have the same amount of opportunities to bond as a team and to grow with one another, but according to Olson, “We made the most out of it.”

Katelyn Gardner, another senior graduating this year, has been playing volleyball with Olson since they were “little girls in rec league.” Over the years Olson has had many different teammates and coaches. According to Gardner, “She’s helped me grow as an athlete, purely from a volleyball aspect, but also how I can grow into a leadership role. Off the court, she’s been my best friend. She’s compassionate and thoughtful and an amazing friend to have.”

Olson has always been a leader according to Gardner, “Maggie has been a leader on the court ever since we were little. Not only is she able to give teammates feedback and help them grow into the players she knows they can be, but she has the ability to carry teams through hardpoints and games. She’s definitely not afraid to use her voice, but she also gives her all every single play which inspires others on the court to do the same.”

Gardner leaves a little bit of advice for the future girls of the volleyball program at Erie High, she says, “I think everyone in the volleyball program should remember Maggie when they feel like they aren’t capable.” Gardner continues to explain that over the past couple of years girls have been put in positions that are new and uncomfortable, though Olson has been able to take her skill and make the best of it.

Though volleyball is a sport that Olson was mainly recognized for at Erie High, during her career she also swam for the swim team. When she was younger she played an array of sports such as soccer and basketball. According to her father Paul, “Maggie has been involved in sports ever since she was 4-5 years old. She played soccer for a few years, gymnastics for another 3-4 years, swam for the Vista Ridge RipTide for 5-6 summers as well as the EHS Swim Team for a year, and has been playing volleyball since age 9 or 10.”

Olson is due to be at Western Colorado University in the fall of this year. There she will be playing division two volleyball and working as a student to acquire her bachelor’s degree. It will be a major in Business Administration and a minor in Data Analysis.

Though her time at Erie has already ended, as she walked the graduation walk on Friday, May 20th for those she is departing from to start a new life, such as her parents, they have full confidence in her success. “She’s grown as a student, player, and human being and gives a hundred and ten percent in everything she does, which will lead to success on the volleyball court, classroom, and in life.”  P. Olson says.